SOCIAL WORK UNDERTAKEN BY THE DEPARTMENT 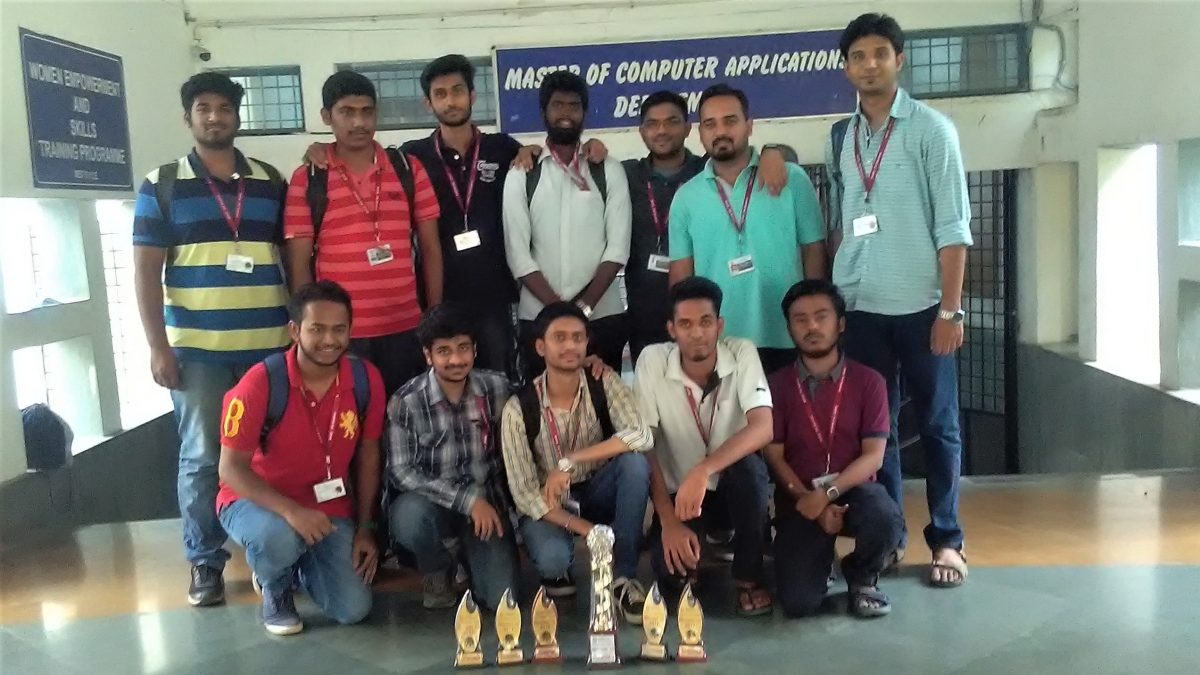 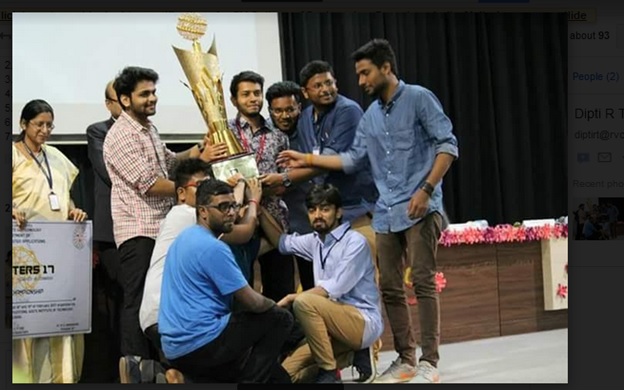 The students of 1st, 3rd and 5th semester won Winner Up in Tug of War, Runner Up in Khabaddi and Cricket in the Annual Sports Meet-2015, organized by Department of Physical Education & Sports, R. V. College of Engineering, Bengaluru, September-October 2015

The annual function of MCA IT Forum was organized on 26th April 2014 with Mr.Suhas, Developer in ThoughtWorks, Bangalore and Alumni Department of MCA as the chief guest. The function started with invocation, briefing on Forum activities, releasing of the department magazine "Drishya-VI" followed by felicitating the students who have excelled in Semester Exams, Extra Mural projects, Sports, Inter-Collegiate fests, Talent Hunt program. Mr Prathviraj of 6th semester was awarded the Best Outgoing Student of the year 2014. Mr.Suhas shared his experience in the department and encouraged the students to participate in forum activities which adds feather to their cap for entering the corporate world.

The MCA-IT Forum conducted Talent Hunt program for the First semester MCA students on 28th September 2013 to showcase the talents of the students in Ist semester. The following students were declared winners and runners under various events

The students of 1st semester MCA participated in the "Accenture Campus innovation program - Crack the Contest" for RVCE Students Hosted by MCA, ISE, CSE Departments on 16th November 2013, and Mr. Sudesh I sem B - MCA was selected as one of the winners.

SOCIAL WORK UNDERTAKEN BY THE DEPARTMENT

THE OBJECTIVES
The Centre is established in 2006 with the following objectives:

COLLABORATIVE PROGRAMMES OF WEST
The WEST programme is sponsored by

The Inauguration function was held on 15th March 2016, The dignitaries present during the function were Chief Guest, Smt. Shubha Mangala Security Con 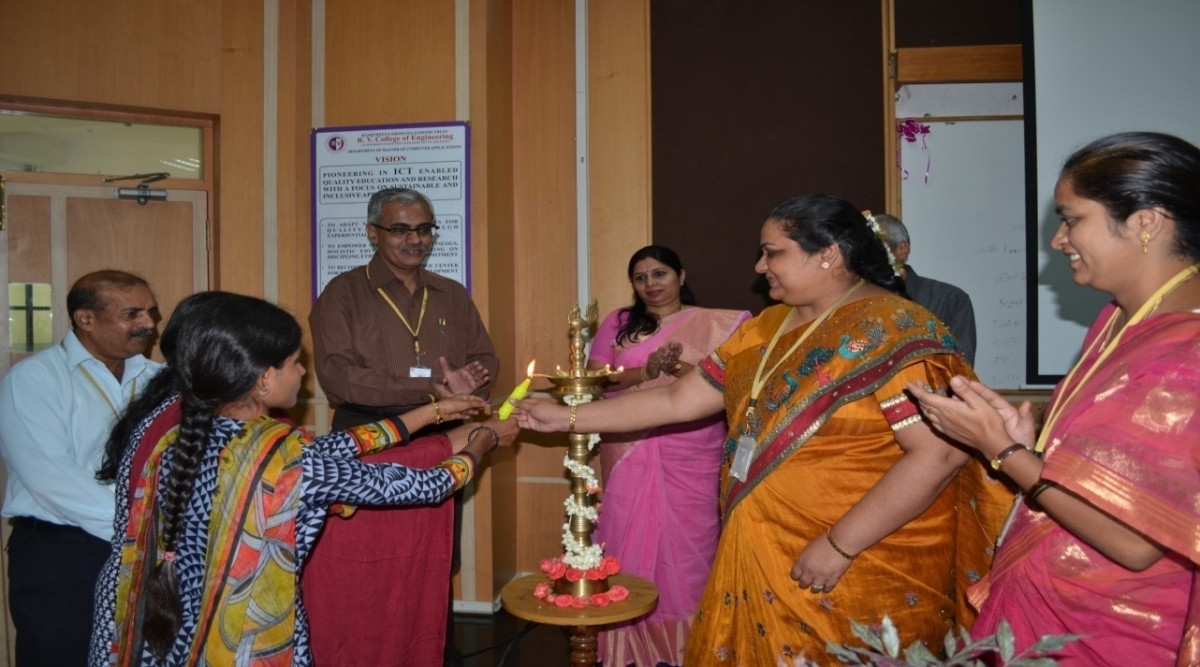 was conducted on 16th June 2016 at Bio-Tech Seminar Hall. Smt Prema Kumari, Joint Director, Women and Child Development and General Manager, KSWDC was the Chief Guest and Smt Maya Chandra, Trustee RSST was the Guest of Honor for the valedictory function. Mr. Krishna Reddy, Registrar, RVCE in his welcome address welcomed the dignitaries on the dias. Dr. Usha J, Director, MCA Dept presented a report on the conduction of the three months training conducted by the department. In her address, Smt Prema Kumari briefed about Ud 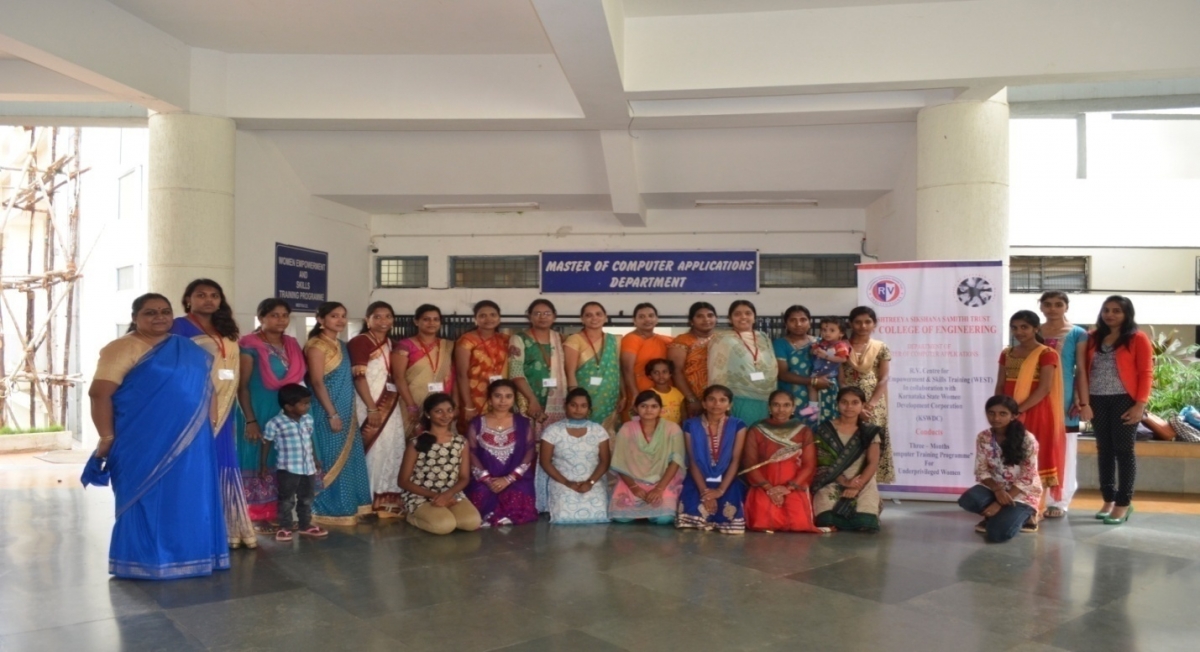 yogini initiatives of KSWDC and problems faced by Women and Children in general at the gathering. Smt Maya Chandra, Trustee, RSST was invited as the Guest of Honor to the occasion. She congratulated the participants on the successful completion of the training and extolled them to use education as an asset for their betterment and pursue their career. Principal, RVCE Dr. K N Subramanya gave the presidential address. He congratulated all the participants and told them to practice the learnings acquired and seek out employment so that they would be able to benefit from the trainings given by pursuing a career. He also said that he would support the KSWDC initiatives in future also by taking up such training programmes under WEST in other Districts also. Certificates and course materials were distributed along with CD to all the participants

The department has successfully conducted three months certificate training programme for women on the topics including Basic IT skills, hardware and software trainings, and personality development skills conducted during December 2014 - Feburary 2015.